Nowadays, many people became to fall in love with golf ,due to the reason that it is popular all over the world , and it is a skillful activity. At this rate, golf cart come in to being, let us know something about golf cart .
Although a golf cart is technically a trolley pulled by a walking golfer and a golf car is a self-propelled vehicle, people use "golf cart" to refer to the millions of motorized vehicles on courses worldwide. Increasingly, golf carts have become popular off the course, with many being used at schools, businesses, gated communities and on city streets
Origin Merle Williams experimented with electric cars during the gasoline rationing of World War II. His Marketeer Company originally built buggies for women to use when grocery shopping. In 1951, Marketeer produced the first electric golf cart at its Redlands, California headquarters. Early Popularity
Although some golfers like walking, most amateurs prefer using carts. Golf carts became very popular very early, and Marketeer soon faced many competitors. E-Z-Go and LEKTRO both began building golf carts in 1954. Cushman started a year later, and Club Car in 1958. In the early 1960s, Taylor-Dunn and Harley-Davidson also began selling 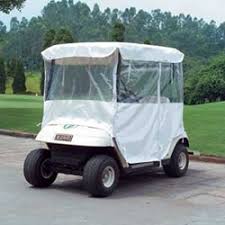 carts.
Early Characteristics
The first golf carts were powered by electrically charged batteries. The first E-Z-Go, for example, ran on a 36-volt battery originally designed to power wing flaps on B-17 bombers. Most golf carts possessed three wheels and tiller steering (a chrome bar shaped like an inverted mouth harp) throughout the 1960s and well into the 1970s.
Changes
Most golf carts today have four wheels and a steering wheel. Gas-powered golf carts gained market share throughout the 1970s and into the 1980s. Most golf carts changed to have four tires and a steering wheel.
Going Corporate
With annual revenues exceeding $200 million, large corporations started buying golf cart
manufacturers in the 1990s. Today, Ingersoll Rand owns Club Car. Textron Inc. bought E-Z-Go and Cushman. Both companies build their carts in Augusta, Georgia, home of the annual Masters tournament.
The history of golf cart is long and interesting, we should say that golf cart makes playing golf more convenient, however, remember to protect your golf cart so that it can be used for a long time, a golf cart cover may help you .It will save your cart from being hurt by the sunrays, rain ,and wind., what a wonderful thing!
Resource: golflink.com. Reedited by www.thepandercover.com